The most clever ads in Airports 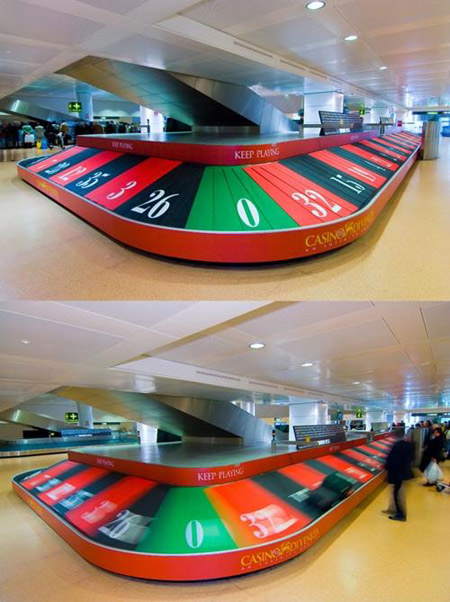 Great campaign of an Italian advertising agency Admcom for the promotion of the "Casino Di Venezia". They have turned a traditional luggage claim belt into a giant roulette wheel at Venice Marco Polo Airport. According to the Venetian Casino, visits increased by 60% since the eye catching ad appeared at the airport. It's what you get for doing an original ad, with good visibility and a good sense of humor. Source 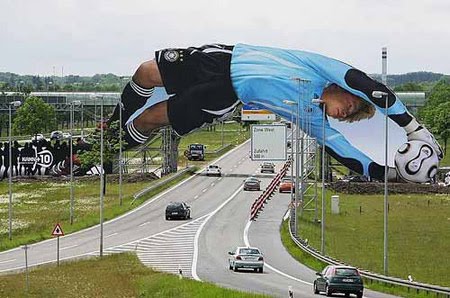 To welcome soccer fans from all over the world to Germany, home of FIFA World Cup 2006, adidas and its ad agency, TBWA, assembled this giant, temporary overpass on the main thruway of Munich Airport and draped it with an enlarged image of Oliver Kahn, goalkeeper of the German team. Source 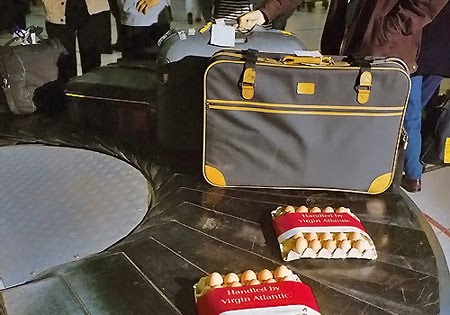 A couple of years ago Virgin ran a guerrilla marketing campaign in South Africa to promote their business as superior to competitors not only in-flight but overall service – baggage handling (which lets be honest, creates a lot of bad press for companies), it was received well by the public and even created a few laughs. Source 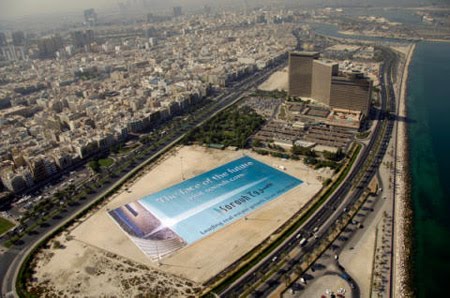 A unique advertising medium that targets airline passengers in their seats. Ad-Air reaches this highly desirable demographic and captive audience by placing advertisements of 20,000m2, approx 5 acres in size, flat on the ground alongside the flight paths in and out of the world’s busiest airports. Source 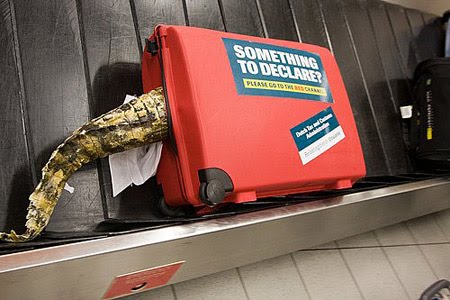 Something to Declare?
Many NGO campaigns are dedicated to ending animal trafficking and the lucrative poaching business. Now the customs officials at Schiphol Airport in Amsterdam are taking their own stab at it with their very original guerrilla campaign. The intention of the campaign, taking place at one of the most transited airports in the world, is to prevent crimes related to undeclared goods.
Red, eye-catching suitcases with bumper-stickers that say “SOMETHING TO DECLARE?” have been placed on the baggage claim carrousels of this highly-transited airport. Doesn’t sound too interesting, right? Hold your horses! What catches the attention of travelers is the fact that huge crocodile tails (fake, I hope), stick out of one end of each of the suitcases. Appropriately, all this fun happens just before the travelers will have to make that fateful decision of “goods to declare” or “nothing to declare” as they officially enter the EU. Source 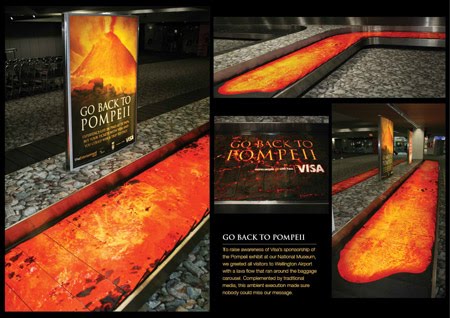 Produced by the TBWA\Tequila, Auckland, New Zealand, this placement used both traditional and ambient media to feature Visa’s sponsorship of the Pompeii exhibit at their National Museum.
Passengers at the Wellington Airport were greeted with a lava flow that ran around the baggage carousel. The message was placed in the lighbox in the middle of the baggage carousel. Source 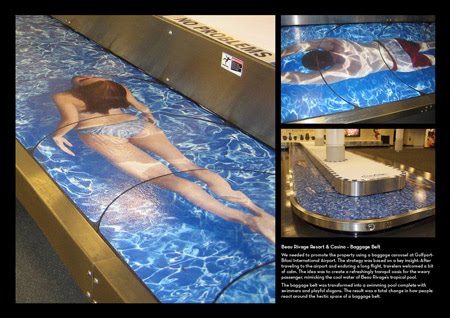 The strategy was based on a key insight: After traveling to the airport and enduring a long flight, travelers welcomed a bit of calm. The idea was to create a refreshingly tranquil oasis for the weary passenger, mimicking the cool water of Beau Rivage’s tropical pool. The baggage belt was transformed into a swimming pool complete with swimmers and playful slogans. The result was a total change in how people react around the hectic space of a luggage belt. Source 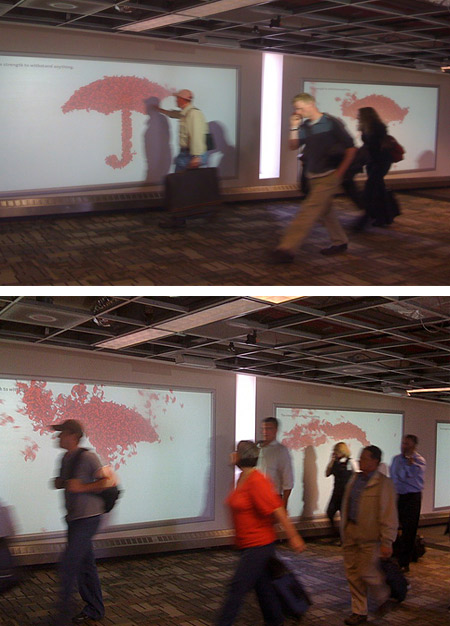 Three projected umbrellas - all made of thousands of smaller red umbrellas. When people pass them, they fly away like leaves in the wind. Very cool. And placed at a place in the airport where lots of people pass by. Everybody saw the ads. Souce

1st Bank in Denver wants everyone to know they care about small businesses. To make the point, the bank has bought rotating, backlit displays at waiting areas in Denver’s airport, showcasing business cards from hundreds of business banking customers. 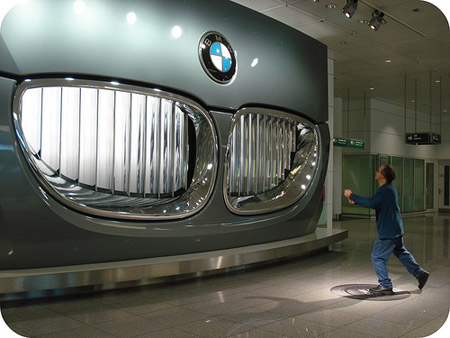 BMW Welcomes You to Munich

Money is no object for BMW. Check out the size of this advertisement at the Munich airport. If only Detroit could say the same. If you step on the starter switch on the floor, the sound of an engine turns over and lights on the grill light up. Mark couldn’t get enough of this interactive exhibit.
Munich is home of BMW headquarters so it makes sense that they would pour money into airport displays. If you can’t afford the real thing, terminal 2 has a small BMW shop with T-shirts, keychains and a pedal and chain unit pushbike. Source
SHARE SHARE SHARE
TAGS: creative advertising